Talking about how to preserve that priceless cape may seem like a topic better saved for closer to hunting season but if we think about it now we may save ourselves costly mistakes that end up in disappointment at the taxidermy shop. When it comes to caping, the scalpel is without question the only tool for the job. The replaceable blades ensure consistent, clean cuts and are small enough to get into those tight places. Havalon sells blades and scalpels and has recently grown in popularity by leaps and bounds but before their explosion into the market I used simple blue handles sold in medical supply stores and they work just as well. The only advantage to the folding versions sold by Havalon is the ability to close that sharp blade into a safe place until you can dispose of it out of the field. The bright orange version can also help you keep track of it out in the field. When you are moving your animal in the field be careful not to drag the animal on the cape you wish to keep. This can make marks or holes and pull out the hair. The two most devastating mistakes people make when trying to salvage a cape are one, cutting it too short or in the wrong places and two, not getting it cooled or frozen quickly enough. If the wrong cuts are made the taxidermist will not have enough material to work with and if the hide is left out too long it will start to deteriorate and cause the hair to slip or fall out. Here are a couple of diagrams showing where to make the cuts for a shoulder mount or a life-size. 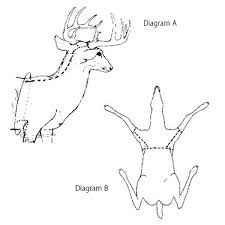 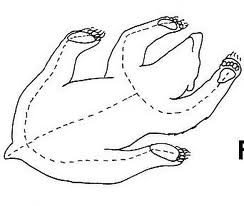 The cuts are the same for all species. Be sure to cut in the long hairline on the backs of the legs so that the line is easier to conceal later. Also trying to make the lines as smooth as possible will help the taxidermist when he goes to sew it back up. Separate the feet and head from the hide but cutting through the joint in the bones at the base of the skull and ankles or wrists. Leave the feet bones inside the hide for the taxidermist to remove unless you are an experienced skinner in which case you probably won’t be reading this. Treat your hide the same way you do your meat. Get it off the animal and cooled down quickly. If you can not take it to the taxidermist that day fold it skin to skin and roll it up, put it in a bag in your freezer until you’re ready to drop it off. Your taxidermist will be thrilled when you show up with a cleanly cut extra large cape ready for him to manipulate into a beautiful rendition of your magnificent trophy.

Most people just get the hide off the animal up to the base of the skull and leave the skull in the hide for the taxidermist to remove. This is wise if you have never watched anyone skin the hide off the face. There are many important tricks when removing it from the face that you will miss if you have not be shown the proper cuts. The next time I am skinning out a skull I will film it with instructions and add it to this post so that there is a resource available for you should you wish to do that extra step. It does make fitting it in the freezer much easier and allows you to boil out the skull in the event you are saving the cape for a friend or simply selling it and doing a european mount on your skull.