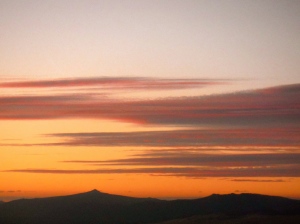 The stars finally aligned. All my ducks were in a row. The 2014 maiden hunt was about to commence. Seems like going out on a simple archery whitetail hunt should not be so difficult to prepare for. Difficult or not I had somehow managed to have milk in the fridge for the baby, Grandma in the house to babysit and had shot my bow the weekend before to make sure nothing had changed from last season. I usually like to start shooting my bow a couple months before season starts but that was just asking too much of the stars this year. Obviously, I was a bit nervous about how well I would be able to shoot but after picking up my trusty bow and shooting some groups with it I was pleased with the results. I guess muscle memory lasts longer than I thought. This particular evening found my husband and I along with a friend all camoed up and ready for some action. We piled into the rig and drove out of town with high hopes and even higher morale. We knew our chances of seeing deer were actually pretty slim because it was extra hot that night. My husband had seen deer in this spot a few times this year already but not since the weather had turned hot. Even though the odds were against us we headed out excited. If you are out there you never know what might happen. That’s the awesome part of hunting, it’s unscripted. The possible experiences are endless. We arrive. I take my place overlooking a portion of the field surrounded by timber and my husband and friend head to their own positions in the field. I found my most concealed spot that still had a view of the area and sat down. I proceeded to take a few moments and rid the area I was in of tall grass and twigs that could be a potential noise maker if I had to draw my bow on an unsuspecting buck. Once I had my small circle of silence I took out my rangefinder and got my bearings…the post was 35 yards, the bunch of grass was 25 and so on. I am not a very good judge of distance so I have to scope it out ahead of time. I felt ready. I got my binos out and started glassing the tree line hoping to spot some deer wandering our way. Nothing in the heat haze but…heat. I put down my binos and took in my nearer surroundings. I kept hearing something rustling in the grass at my feet…I envisioned a large rattler. My mind took off on that tangent and ran with it. The story in my mind ended with the snake on the tip of my muzzy broad head. Back to reality. I glassed again. Nothing. More rustling turned my attention back to my feet, then I saw it was a little field mouse. He was munching away on the grass…I envisioned him on the end of my broad head. It wasn’t pretty so I decided to just watch him instead and see if I could be still enough to go unnoticed. Nope. He saw me and darted back to his hole only to continually return for bites of grass but with much greater caution. His beady little black eyes never shifted off my form. The evening went on this way as the sun slowly sank behind the mountains. The wind shifted directions and it wasn’t going the way I wanted it to. Another scan with the binos revealed nothing on the horizon. Not even a heat haze remained, just the elongating shadows of timber stretching across the meadow as if trying to grab the field and fold it up for the night. Finally the evening sounds took over and the shooting light faded to stars. We gave it up and crept from our hideouts like Snow White rising from a spell of sleep. Most folks would just say it was a wasted evening with no luck. For this mom it was a refreshing adventure outside, it quenched my drowsy soul and put light in my sleepy eyes. I love the whole experience, even if I see nothing but the tail end of a mouse.