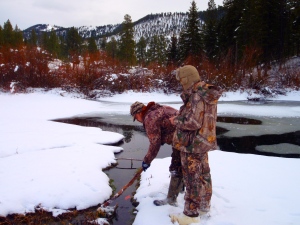 Hunting season is closed now which means trapping season is in full swing. The Mountain Man has a line running and traps martin, mink, beaver, red fox, muskrat and bobcat. He has already had some success this season bagging a nice tom bobcat and two red foxes. We enjoy going along and helping check and reset traps with him when we can. We met him on the line this weekend and set out to check the sets. 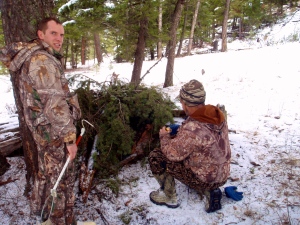 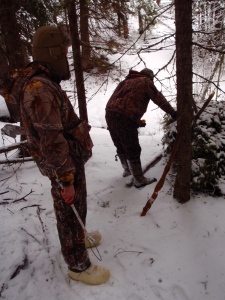 This year, so far, he mostly set up his bobcat cubbies. They consist of a nice sheltered cove made by a wire mesh, boughs or bark and sticks. Strategically placed sticks cause the bobcat to step directly into the MB 650 trap, concealed by leaves, on a bed of wax dirt. Bait inside the cubby and skunk scent completes the cubby itself. Outside is hung a grouse wing from previous successful hunts. The fishing line attached to a swivel allows the wind to move the wing in a way that attracts and interests the cats. It makes them curious enough to come close and smell the skunk scent. Hopefully, they will investigate the scent, see the bait and step into the trap while attempting to get it. The trap is attached to a chain that is either buried into the ground or put onto a drag. Walking up to the cubby is an exciting trip. You never know what might be in there. There is a real possibility of finding a skunk, squirrel, cougar or any other animal interested in bait. This trip we found ourselves tromping through the snowdrifts to and from the cubbies many times. By midday we were hungry and stopped to make a fire and eat our traditional trap line staple…hotdogs. Huckleberry sodas completed the meal and we were rejuvenated for the rest of the work. 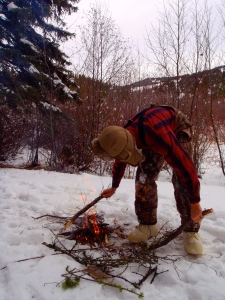 Most of the sets were untouched and we simply put fresh skunk scent on the sites and left them alone. One trap was sprung by a squirrel and then something had munched on the squirrel for awhile. We reset that trap and moved on. We put out a few muskrat sets and built one more bobcat cubby in an area where the Mountain Man had seen a large cat a few days earlier. 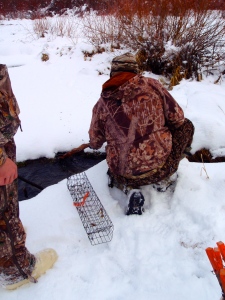 We headed back to the cabin and finished off the evening chores by butchering 13 rabbits. The Mountain Man and his wife raise meat rabbits and had some that were big enough to get put in the freezer. It only took about an hour for the three of us to capture, kill, skin and clean the rabbits. Then they were put in ice to chill. Rabbits must be the softest thing on earth. As hard as it is to see such an adorable animal die, it is comforting to know that the circle of life is alive and well in the mountains and those rabbits will provide many a meal for the Mountain Man and his wife just as they provided many healthy meals of fodder for the rabbits as they grew. They had lived good happy lives as a rabbit should and died in the fastest and most humane way possible. We slept well that night and got up in the morning to a snowstorm.

We set out to check the traps again and had logs blown across the road by the wind in the night. An axe was used to quickly clear it and then we were on our way. 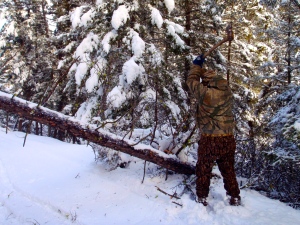 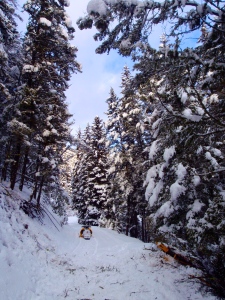 We didn’t catch anything in the traps this time but every trip up the mountain teaches me new and important lessons. I learned that muskrats can not resist parsnips, that a trap will freeze up if not set on wax dirt and that cougars getting into your traps is a real possibility. We found cougar tracks walking right next to one of the cubbies. Luckily he walked on passed without too much investigation. 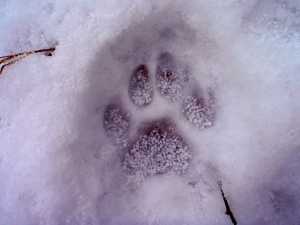 I love learning on the trap line. I also love the sore feeling I get in my hips and thighs that only tromping through deep snow can give me. The fresh air and brilliant white vistas are just icing on the cake. 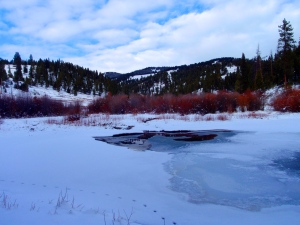